Angelfish in the wild are found in South America in the basins of the Amazon and Orinoco. They hold in calm areas of water bodies such as bays, overgrown with reeds, coast, lagoons and flooded lands rich in plants, as well as small quiet creeks. 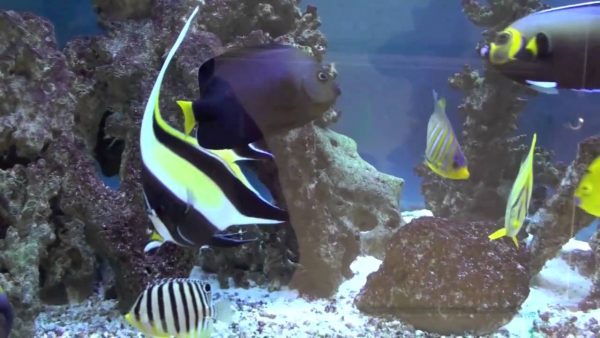 The main color of angelfish body varies greatly, can have different shades of gray from greenish-gray to olive with a silvery sheen. The back is darker than abdomen. On the body extends vertically dark bands, saturation of which is dependent on the state of the fish. The first of which passes through the eye of the fish, and the last – in the base of the tail fin. As a result of many years of breeding modern aquarium angelfish are painted in the most fantastic colors, they can be striped, black, marble, gold, smoky, two- and three-color, green. Also widespread is voile form with more elongated fins. But natural form Pterophyllum scalare in the aquarium is now no longer met as after so many years, it mixed with the breeding species. 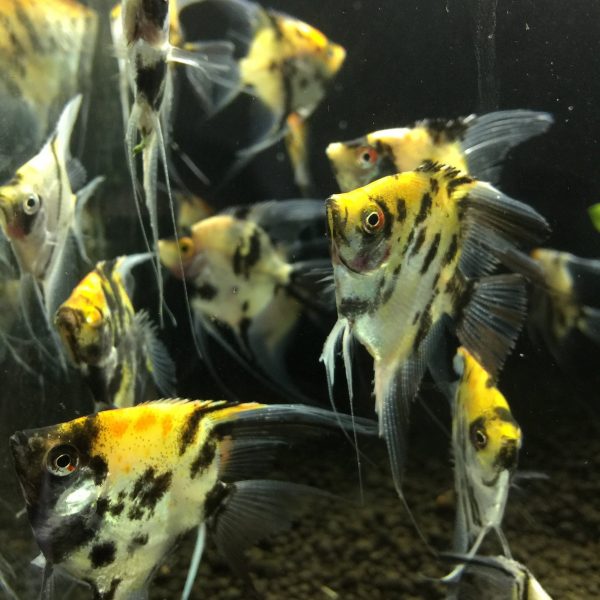 Angelfish are known to aquarists for almost a hundred years. Elegant and unhurried, they can decorate any aquarium, kept with most peace-loving fish. Another 20 – 30 years ago angelfish was considered problem, difficult to maintain and especially in the breeding of fish. But at the moment it is not. Changing many generations of fish bred and raised in captivity, led to their complete adaptation to the aquarium conditions.

Angelfish – quiet peaceful schooling fish. It is better to keep them in a group of 4 – 6 fish. They are kept in aquariums with more small and comparable in magnitude, but non-aggressive fish species. If the aquarist is not going to make a species aquarium, it is advisable to keep them together with mesonauta (Cichlasoma festivum) or catfish genus Corydoras, but not with the barbs, and viviparous haratsidovymi toothcarps that may bite in angelfish tail fiber fins. Despite the peaceful nature, a hungry adult angelfish is not averse to swallow a small fish, so the coexistence of, for example, neon with these fish will not be very long.

How do I get a credit report online, and is it possible?