The history of this character counts almost 70 years. Joker appeared in the numerous comic books, cartoons, television series, movies and computer games. More than once, Joker took the first place in the lists of the greatest villains of all times. So it’s no wonder than his image is often used for the fancy-dress parties.
The image of Joker represents the sinister clown, machinating against Batman. It is considered, that initially Joker was the unlucky comedian. Then he tried on the costume of Red Cap (Batman’s enemy), and at the time of card factory robbery, he fell into the tank with acid.

After this case, Joker has acquired his sinister image. He went mad, and the ominous smile settled on his face. His hair became green, his skin turned white, and the black shadows appeared beneath his eyes. Joker started to kill innocent people, leaving the ominous Chelsea smile on their faces (the scars from the corners of the mouth to the ears). 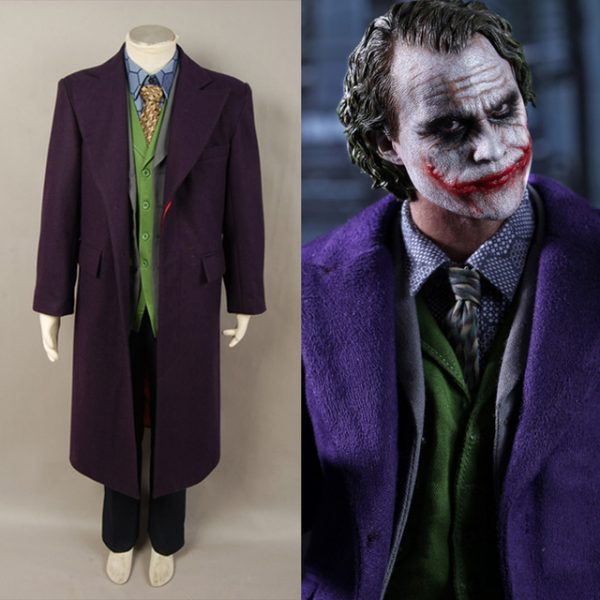 It is quite simple to make the Joker’s costume, as the villain wore different clothes in various films, comic books and cartoons. But the traditional feature of his image remained the violet jacket. To complete the jacket you can buy the shirt of grey, yellow, green or orange color, green, yellow or orange waistcoat, yellow, red or green tie and the gloves of violet or black color. It’s difficult to find lilac trousers, so you can substitute them with the black ones.
A distinctive feature of Joker is his green hair. You can choose the green wig or experiment with the green gouache, slightly diluted with the water. Such paint won’t damage your hair.

At this point, the creation of Joker’s costume finishes, and we begin to create Joker’s specific make-up. To create Joker’s make-up, you’ll need the aqua face-paint of white color. Bleach your face with it, using sponge or brush. Then use the black eye shadows to highlight the area around the eyes. If you want to try on the earlier Joker’s image, just highlight your eyebrows with dark eye shadows, and leave the area around the eyes white. With the help of red lipstick, mark out your lips with the casual line. Then draw the large scars from the corner of the mouth.

If you want to make Joker’s make-up more frightening, you’ll have to spend more time. Use the napkins, special glue and red paint, to create the realistic scars at the mouth. Mark out the deep wrinkles on the forehead, at the nose and around the eyes, using concealer and thin brush.

The best ideas of landscape gardening